I just have a simple request for this adorable pair 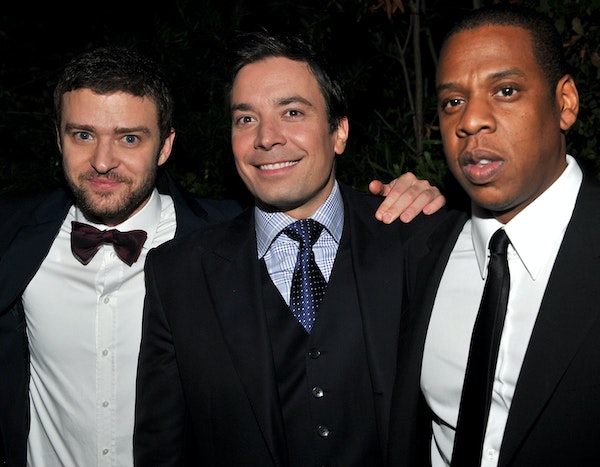 I just finished watching the SIXTH installment of your History of Rap series. Bravo, bravo, yaaay, well done. You guys tore down the house, again. Here’s my issue, and please know I say this with the utmost respect as you both are icons in your respective fields.

(sidenote to readers: Icon too strong, you ask? Nah, Yeezus mentioned JTim in his VMA homily which is normally enough, plus FutureSex/LoveSounds. Even though Fallon made Fever Pitch, he still makes the cut for allowing this to happen.)

Now JimBerlake, back to my gripe with all of this. You’ve both managed to pull off impressive crossovers in your career; Justin from Disney to N’SYNC to King of R&BcomedyPop, and Jimmy from SNL to The Tonight Show, despite Fever Pitch. Hip-Hop is different though, guys. Nobody minded when it was like 2, 3, 4 times you guys ran it back because it’s really good, but 6 songs is an EP and this is where things have to change. We need original music from you two, no more covers. We need a full JimBerlake (yeah, it’s going to happen) mixtape. It’s gotta be sponsored on Datpiff and everything. We need you guys to have started from the bottom. There needs to be a mixtape release party at an Italian restaurant that had no idea it was going to be a rap show. There needs to be physical copies for $2. The album artwork has to be No Limit Records-inspired. There needs to be a Papoose feature. Obviously, the Roots. Now that Stephen Colbert is your new rival over at CBS, a remix Drake’s diss track “Back 2 Back” is probably in order. I don’t know, that’s just a few things off the top of my head. I feel like you guys can come up with the rest.

If you want to be taken seriously in this game, we’re going to need you guys to do this the right way. It’s not going to be easy, you’ll have to be on your #TeamNoSleep grind, never forgetting to send Facebook blasts with your mixtape teaser video at least 3 times daily. You’ll need to start working terms like “link in bio” and “it’s a movement” into your everyday vocabulary. It’s a process, and many have never made the complete journey, but I see potential in you two.

I appreciate you taking the time to read this, and I look forward to your Funk Flex freestyle one day.

PS – In case you missed it…