Features
Oct 27, 2017
An odyssey into the mind of Forgivemelvrd

Read our conversation with the creative force below. 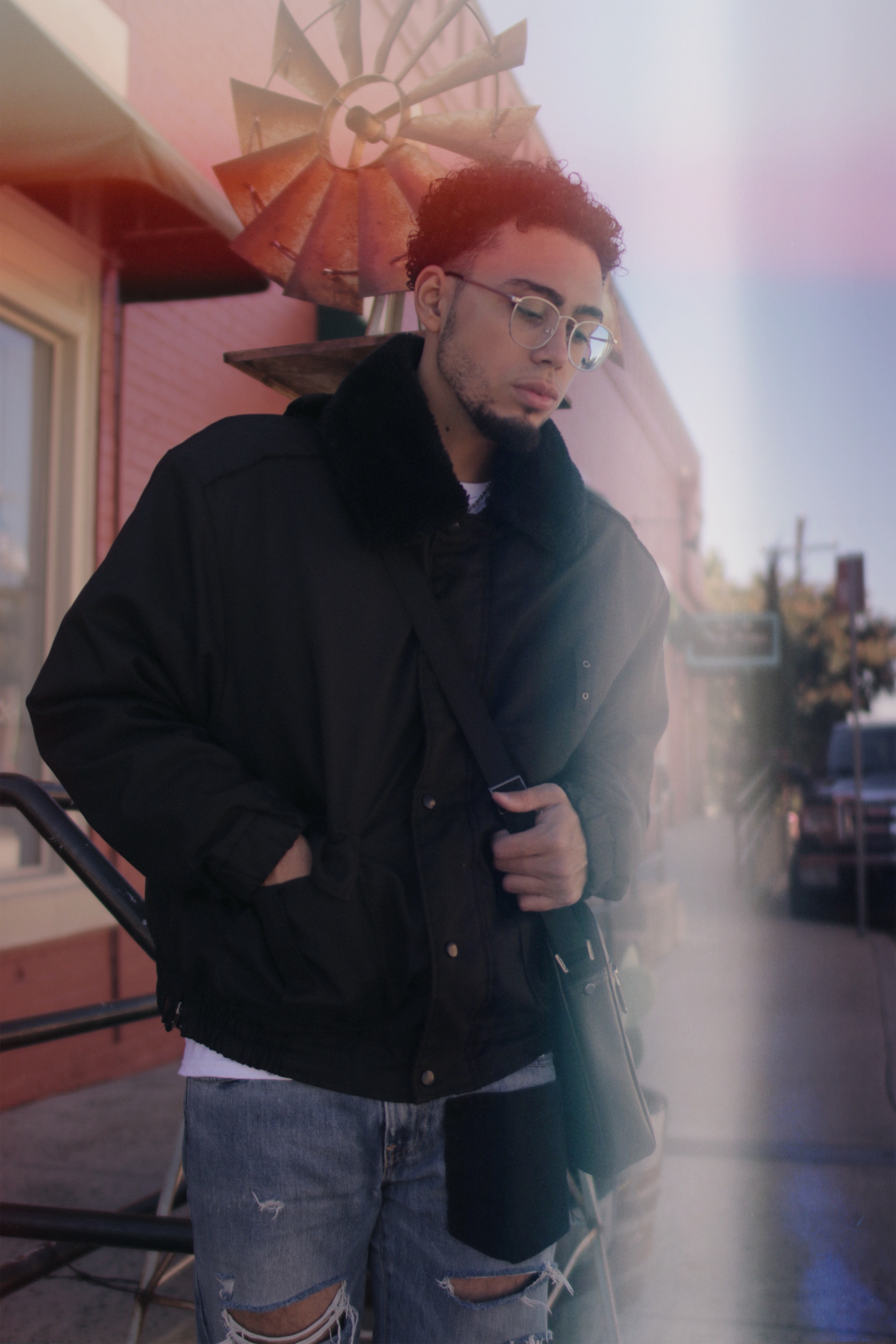 Forgivemelvrd built a legacy for himself before he even finished high school. Multi-talented and versatile, the budding force refuses to be constrained to one ambition. Prominent players in the music industry such as A$AP Twelvyy, Thouxanbanfauni, and Lucki have confided in him to transpose their music into visual melodies via album cover art, yet Marcos seeks independent prestige and prosperity in his craft. We conversed with the virtuoso about organic minds, growing up in Puerto Rico, relationship with Playboi Carti and more in our in-depth interview below. 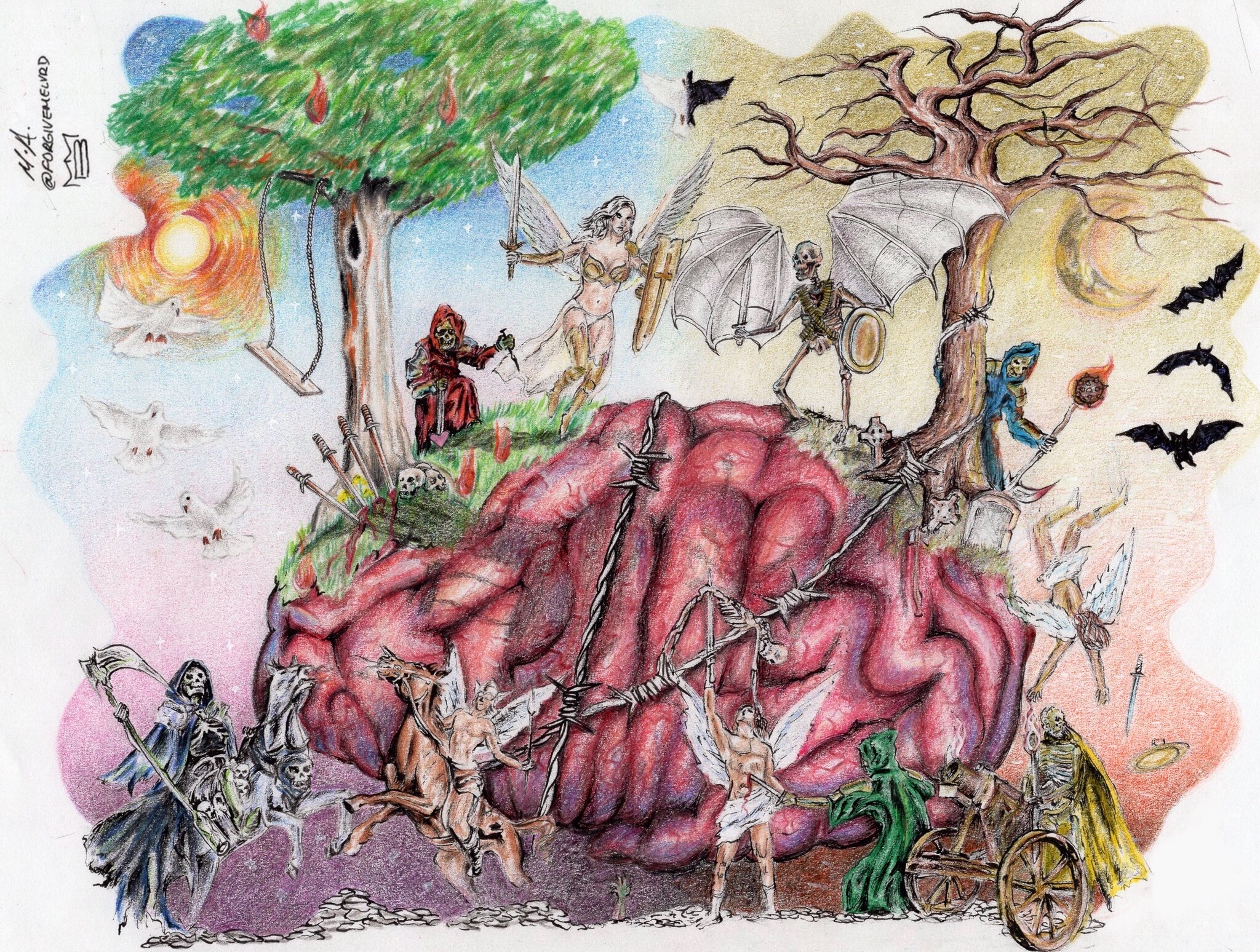 What is the message you hope to get across with your artwork?

The message through my art will always be positive, even if it doesn’t seem like it is. It’s also for the people to decide theirselves. In each piece , there are multiple messages that could be made out , it’s just how you perceive it. Sometimes it has to do with faith , or hope , or believe , or to carry on. Most of it is my experiences , thoughts & ideas mixed with some inspirations from music or films or pictures. It’s a little bit of everything. It’s what I feel at the moment. I can’t create a piece if I didn’t personally go through it or thought about , there wouldn’t be any ties or attachments to it so the expressions wouldn’t be the same. Which is why I create messages based on my experiences , not somebody else’s. People just relate to it , because we all go through similar struggles.

How did you come to do work for A$AP Twelvyy?

I had did a Mob piece about a year ago with most of the Mob members on it with Yams at the top. It blew up on twitter & Instagram. Twelvyy loved that piece. He followed me & messaged me & we talked for a while. He told me he loved my work & wanted to see what else I was working on , & I showed him & also told him ideas that I had & we just clicked from there. We worked on a lot of things earlier this year before he dropped his album. He taught me a lot & he shared lots of ideas with me , & vise-versa. He’s the type of dude to have a lot on his plate & let everybody eat off of it. He’s the definition of genuine. Shout out to him. 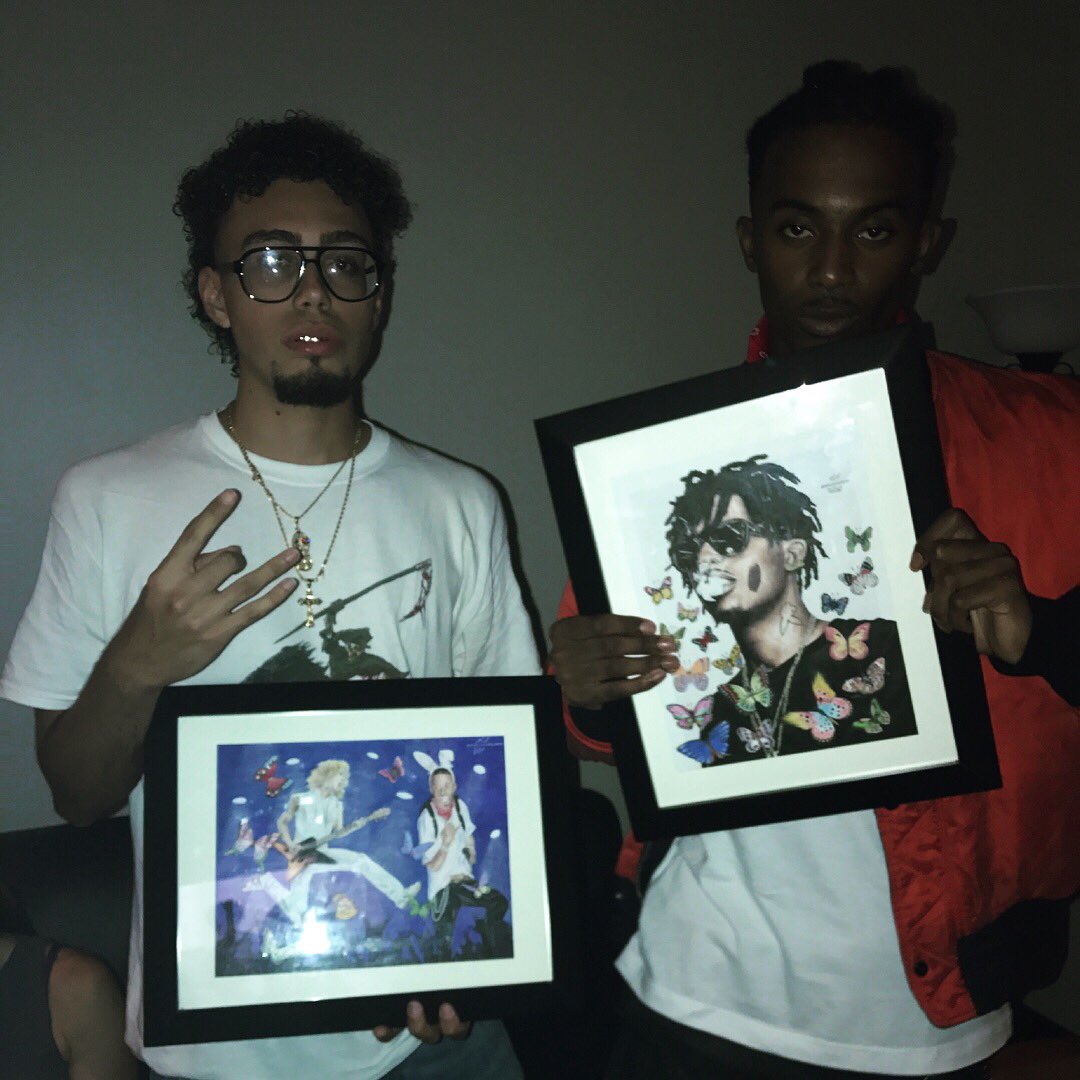 Was it through Twelvyy that you met Playboi Carti?

As far as meeting Carti , Twelvyy didn’t have anything to do with it. Carti had messaged me through twitter last year , asking where I was from. He told me “Yo you’re amazing you got to come to Cali” , haha. We talk from time to time. He loves my work & I sent him some for his home in LA. He has framed art I made for him & along with some prints all around his house. I had made new artwork for him earlier this year & was going to send it to him , but I figured I should wait until his tour concert in Dallas. He really wanted me to come to his show , so I came with the art that I had. It was the first time I met with him in person , he showed lots of love. He appreciates me just as much as I appreciate him. It’s mutual , & it’s beyond the fame. He’s like a good friend.

Have you always planned on making music-related art?

No. Music inspires my art a lot , but I never started making art for music in the first place. Fauni was the first artist to ever come to me for cover art ( for his “Heavy Weight Champ” tape ). It felt right at the time to do that & be a part of his project , since I’ve always been into his music. He helped a lot & still does , always motivates me. But that was never my true intentions though , & it still isn’t. He gave me a bright light for people to categorize me as a cover art artist , & ever since then a lot of rappers / artists have been coming to me for that. I did a few more earlier this year for artists like Chris Travis , Lucki , & Twelvyy , but I came to realize that’s not what I’m here for. No offense to any rapper or singer , but I work a lot on my craft. Like 24/7. I don’t work hard to perfect my craft just so it can be the cover of a song on SoundCloud. I don’t want to put myself in a box. Same goes with commissions. I hate commissions.. I just want to create for myself & myself only. I like to work on my own artwork & my own designs for my clothing. 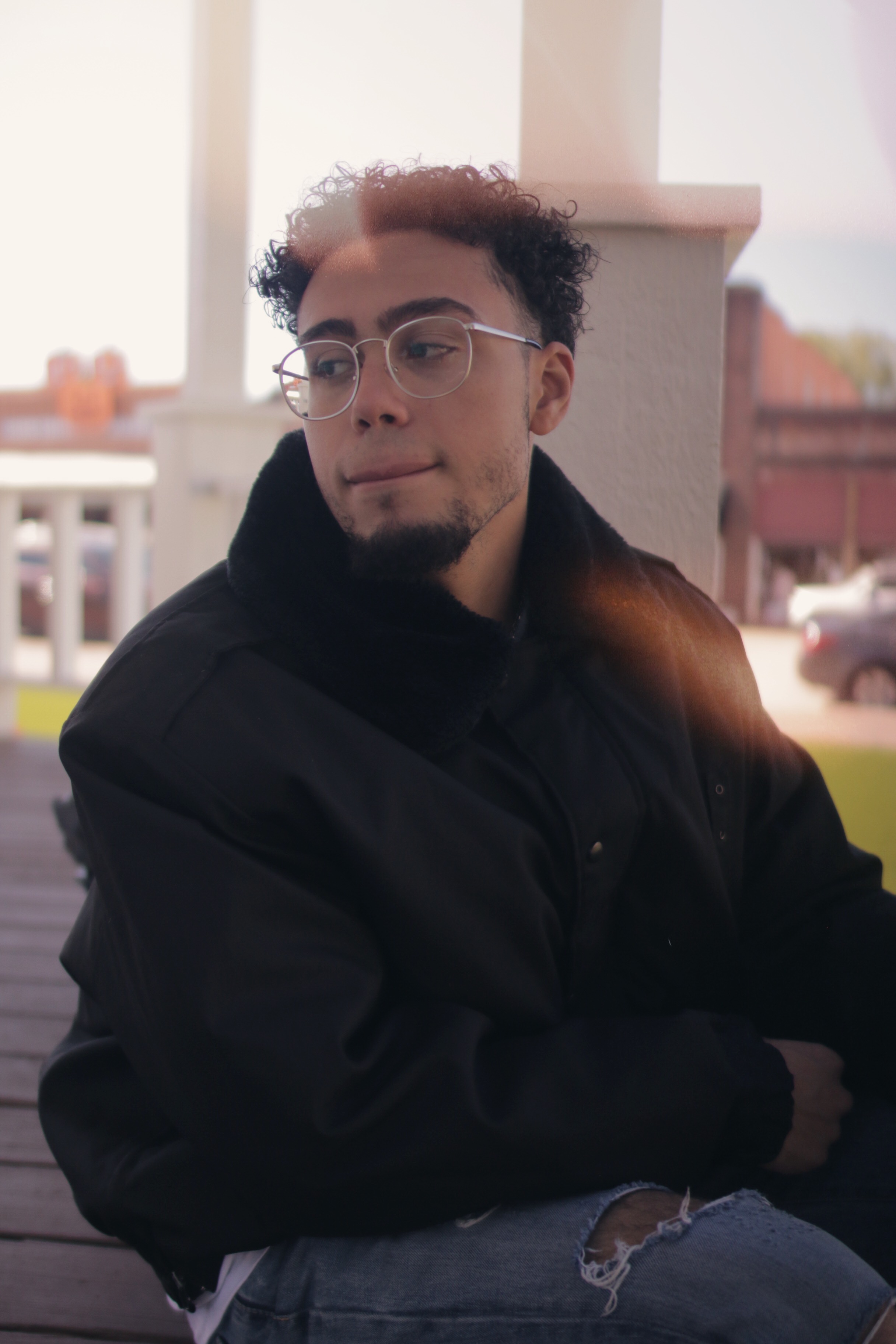 Tell us a little bit about where you grew up, what you did with your homies, what you’re doing now?

I was born / raised in Puerto Rico , until I was 9 , which is when I moved to Dallas. Puerto Rico did play a role in making me who I am today , but since Dallas is where I really grew up at , that’s really what made me. I was very selective on who I hung out with during my middle school / high school years. I’d choose wisely , & I’m still close to the 3-4 people I always hung out with. Hence why I was so selective. We were always together , just talking about how great the future is going to be. Just on some “youngins” type of thing. Going around shopping & going downtown to take pictures.. Did some headass stuff here & there , but for the most part we just chilled , got money together & didn’t get in no trouble. We’re still the same nowadays. Shout out to Ladavian , Moises , Roberto & Ivan. Those are my brothers , always supporting me through all of this. 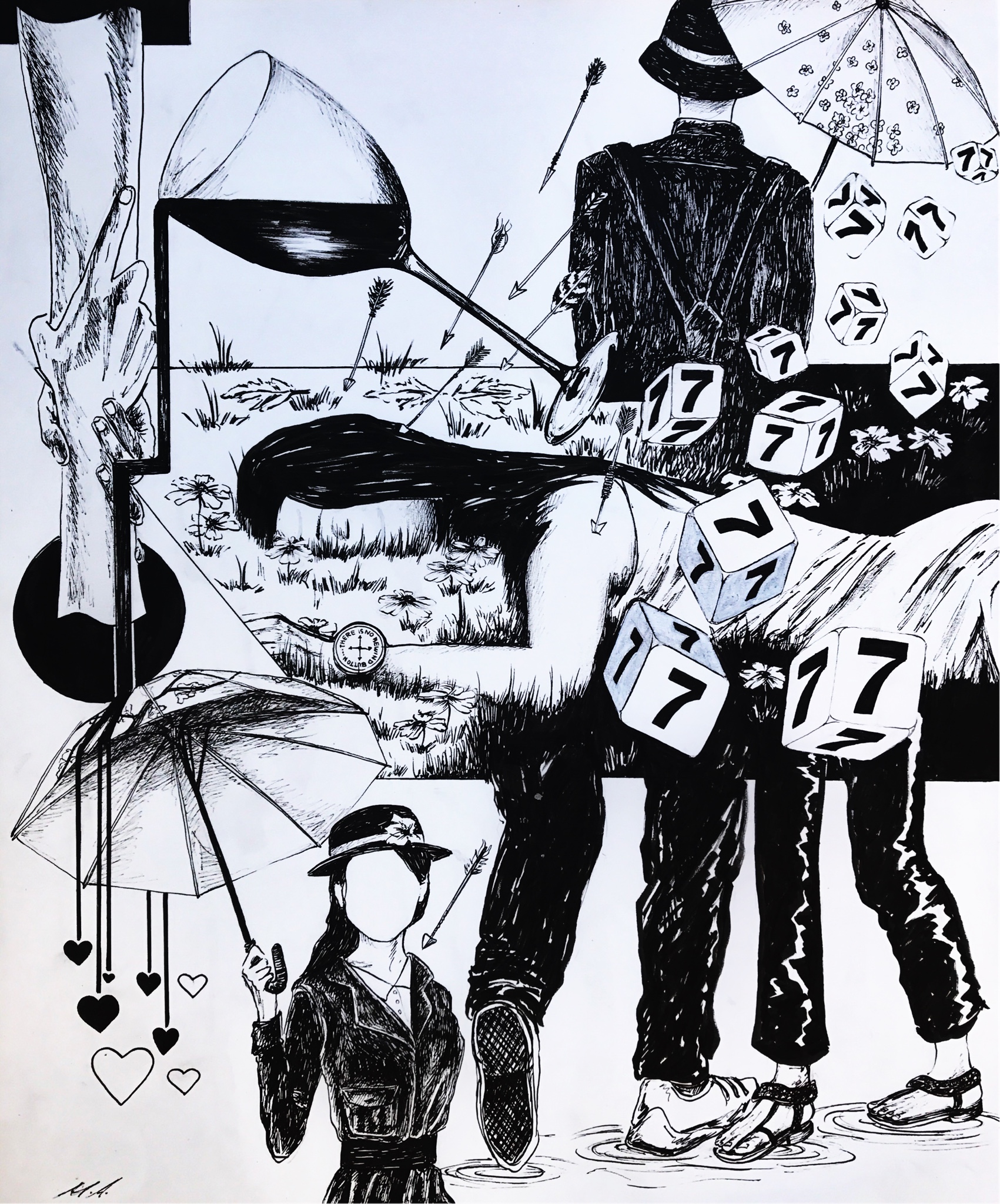 You talk about having an organic mind, unaffected by drugs. Tell us about the misconception that drugs alone can make people creative.

Having an organic mind & not having to use drugs to be creative; That’s just me. I’ve always been creative ever since forever. I was born like this, I don’t need anything extra on my mind to get an idea out of my head. I’d rather go through something else , watch a film , read something or even talk to a stranger to spark something in my mind for my next piece. A lot of people tell me , “You must’ve been on acid when you created this” or something , but I like to stay away from all of that. I’m pretty sure drugs can make you more creative though & if you want to do it , then you can go right ahead. I honestly don’t even care. That’s just not for me. The only thing is , don’t do it just because somebody’s pressuring you or because you’re worried people are going to think you’re lame if you don’t. 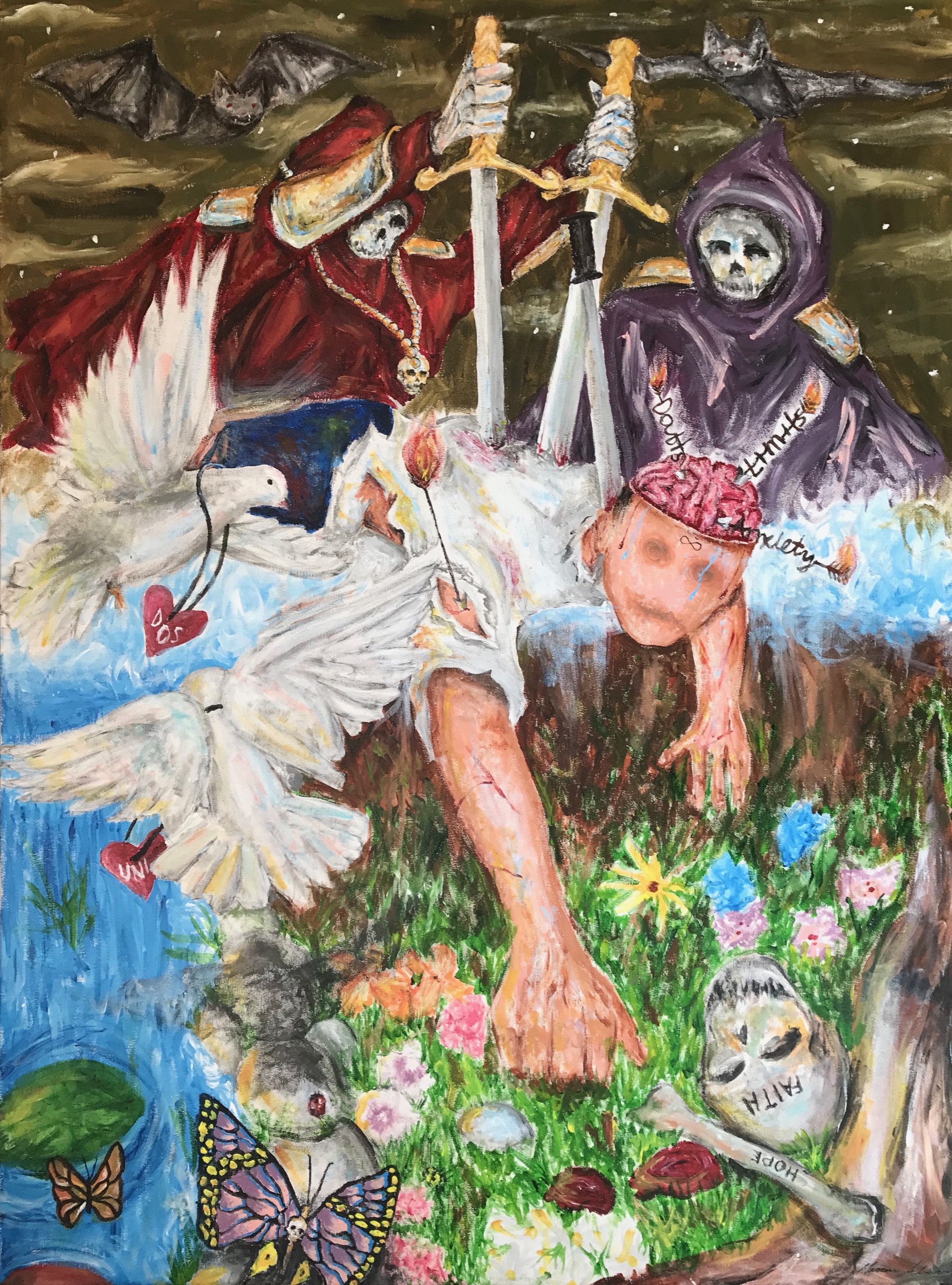 You have a lot of symbolism in your artwork relating to the concept heaven and hell, are you spiritual?

I grew up going to church every Sunday , & I still go whenever possible. All of the symbolism I use in my art about heaven & hell is just what real life is. That’s all it comes to in the end ( if you believe in heaven & hell ). But it’s not only that , everything in this life is heaven or hell. At least the idea of it is. Like , when something great happens to you; You’re like , “damn , I feel like I’m in heaven right now”. Or when you’re going through depression, it feels like you’re walking barefoot around hellfire. That’s all it is. All of the demons in disguises. Your vices / sins. All of the people trying to do you wrong. Karma. Internal battles. Just fighting your demons everyday. All of which are going against your guardian angels protecting you. The people that actually love & care for you , etc. It’s a life cycle. 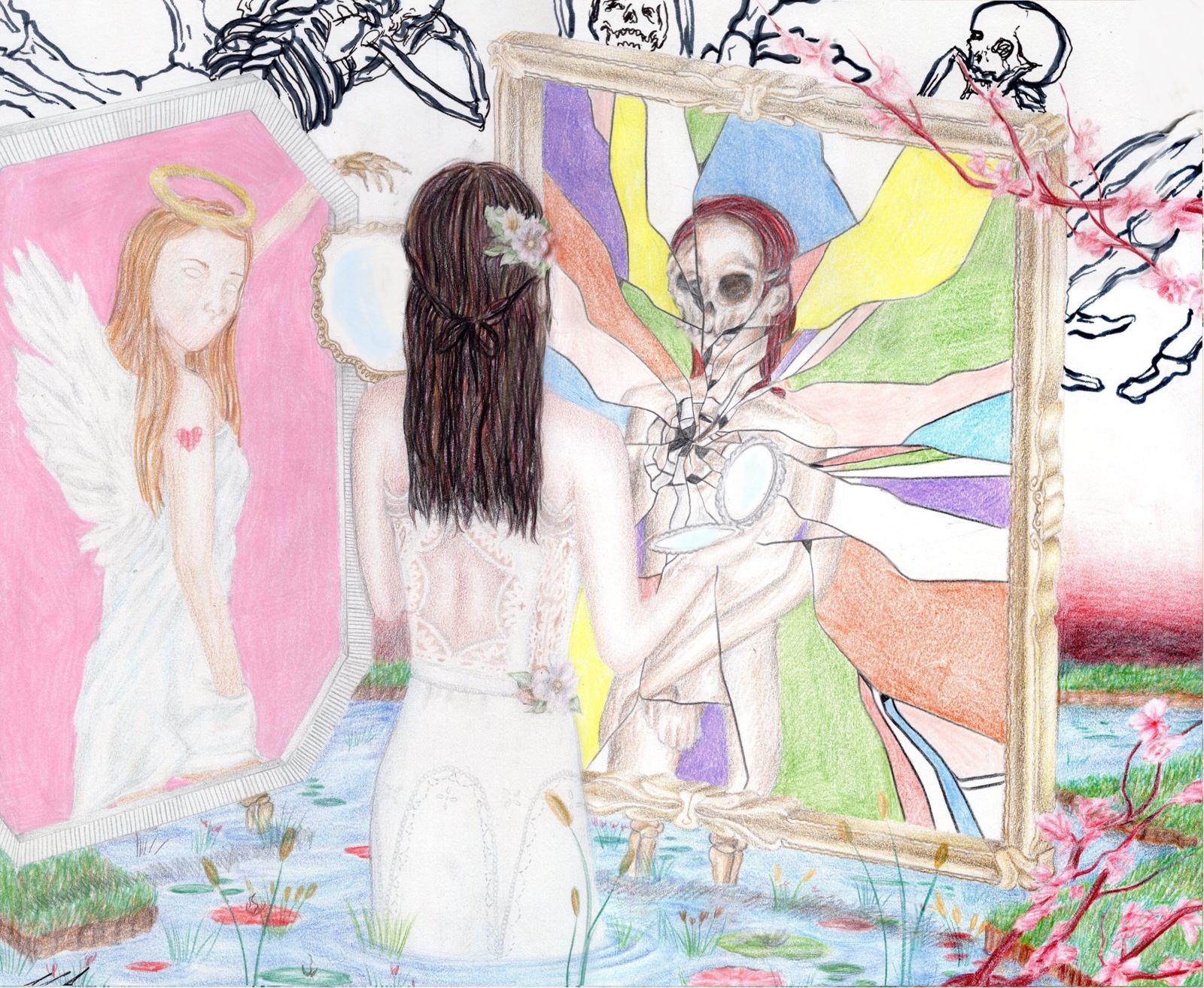 Your drawing technique appears to be very colorfully sparse, with a lot of light shading with lesser amounts of dark, heavy coloring. What about this method appeals to you?

All of my pieces are either colorful with colored pencils or just straight up black & white with ink. My method of using colored pencils is something I developed over the years of practicing. I’m still perfecting my shading with coloring to this day , along with many other things. I like mixing cools with warms in my pieces , lightly colored with some dark themed stuff going on with it. I think it’s a good mixture.  It’s just what I prefer doing. It goes with all of the messages I want to carry. Some of my pieces take forever to do since it’s a lot of coloring & detailing , but that’s the part I enjoy the most.

How was your high school experience affected by the hard work you endured and success you experienced?

During my high school years I just always did my own thing. Almost everyone was just in the same world thinking small. People were so judgmental & laugh right at somebody’s face for chasing their dreams. They were full of hate. I ignored all of that though , but at the same time it motivated me to be a better person. I didn’t want to be like them. Don’t get me wrong , people were actually cool & I didn’t have beef with nobody , I just didn’t mess with them like that. Focusing on myself , I took every single one of my ideas & ran with them , no matter what anyone thought. It was just something inside of me that told me I can’t just sit down & do nothing. Why would I waste my time when I can get ahead while I can ? Therefore , I wasn’t too big with parties or social events or whatever. I faithfully worked on my craft everyday ( still do ) after school or even during school. Homework & studying or just hanging out was the last thing on my mind. 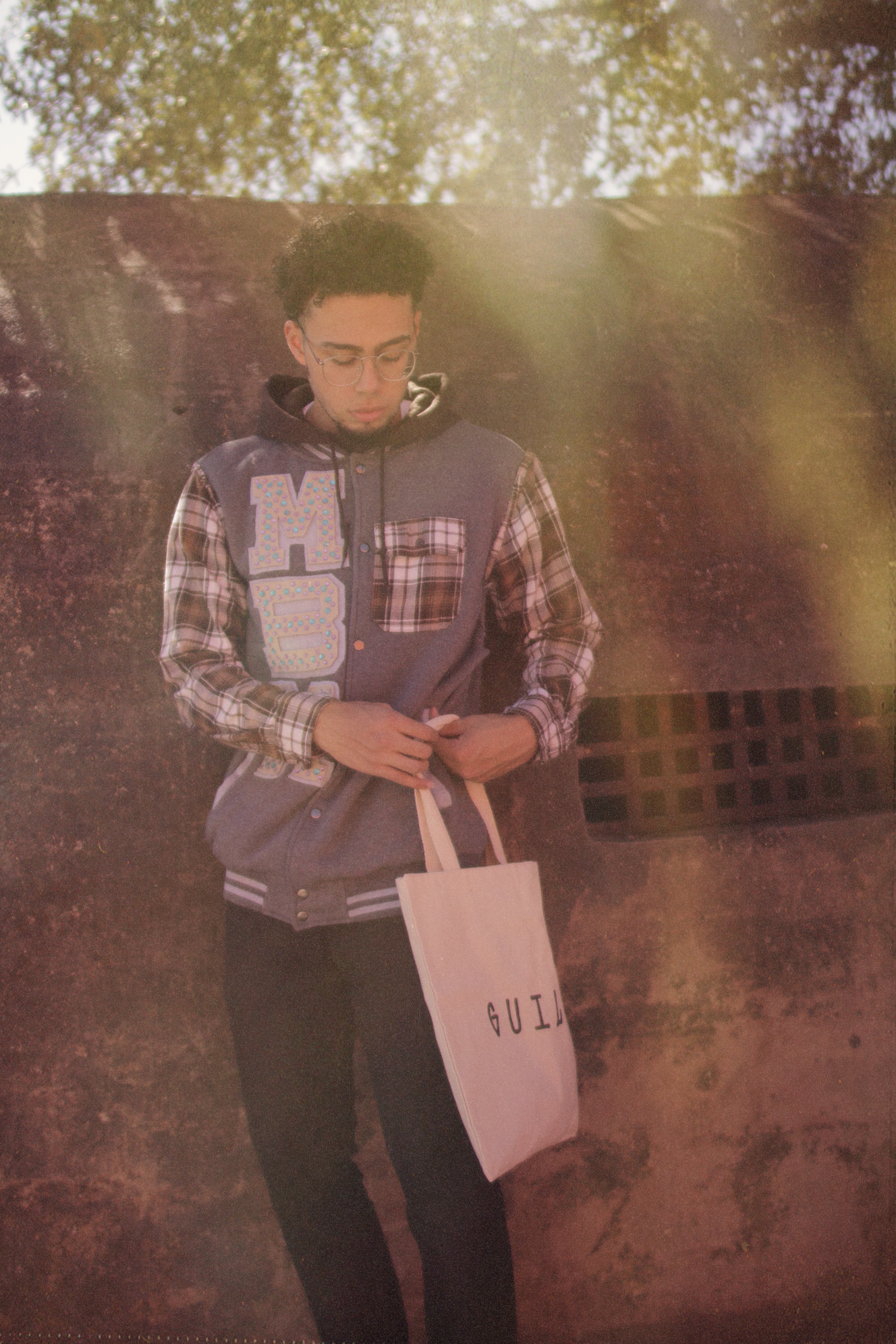 What is next to come for your clothing company, MBMCLO?

A lot of new things. I just had the biggest drop for the first time in September. Expect more like that , with even better things. I won’t talk about it at all though , I hate talking about my future work. I’d rather show.

Your personal style is very dope and aesthetic, where do you like to buy clothes?

Thank you. I’ll shop anywhere. If I like something i’ll buy it. I find a lot of cool rare stuff at thrifts. I rarely go to the mall though. I love shopping & looking for things online. Oh & also , when young kids have clothing lines & they gift me with their gear. I love that because they actually have cool designs , I like to support. 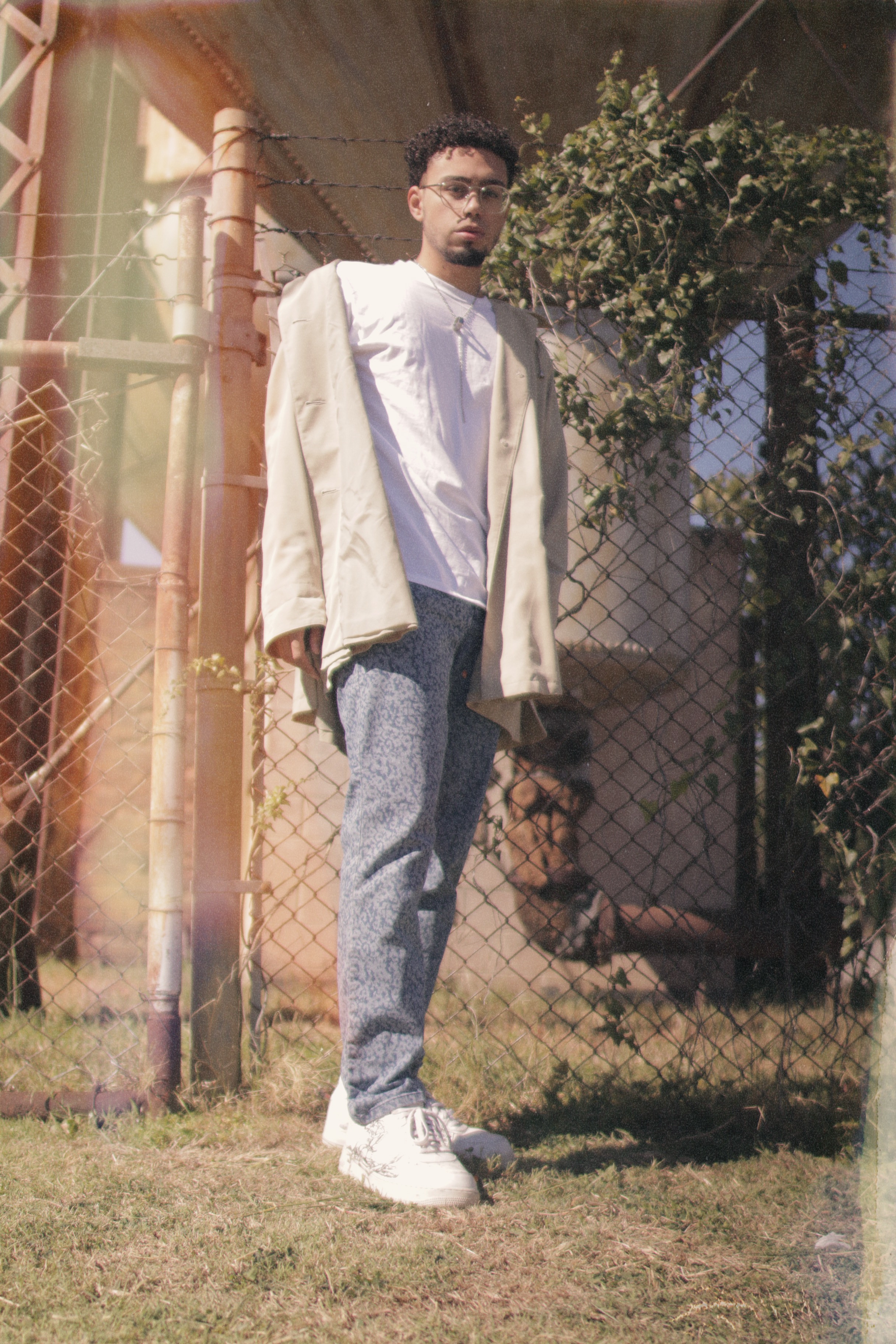 Tell us some of your favorite musical artists.

I have way too many to name. I’m at a point where i’m listening to everyone from Enya when I’m drawing , to Fauni when i’m driving uptown. I listen to some Spanish artists , a little bit of rock. Jazz instrumentals. It just depends on my mood.

What is your all-encompassing goal as an artist?

I’m working towards having art shows / pop up shops. But at the top of everything , I want my art to end up in galleries. I want to spread my thoughts & ideas through my art whether it be a painting or piece of clothing. Everyone who supports me , I promise I’m working on a lot of things to give back. I have so many other ideas but I don’t want to mention them. I’ll show you guys soon.