Learn how the West Side creative turned a hobby into his profession. 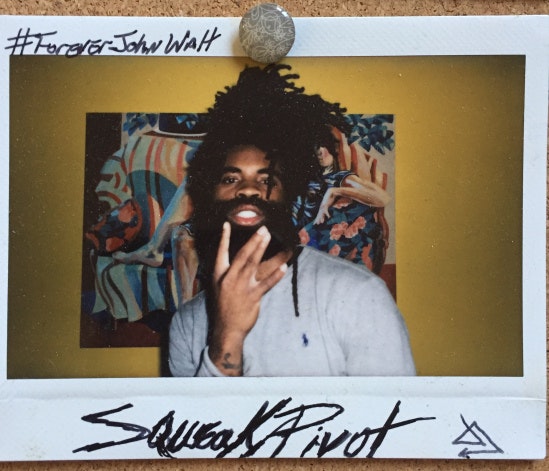 A jack of all trades, SqueakPivot‘s titles have ranged from audio engineer to music producer to DJ. Hailing from the West Side of Chicago, Squeak is forming his own lane and doing his own thing. He’s a creative if there ever was one.

Learn more about the 23-year-old genius in our in-depth interview below.

How does being from the West Side of Chicago influence your sound?

I mean, I grew up listening to a lot of Crucial Conflict, Do or Die and Twista. You know, all that West Side shit. I low-key I realized I had a West Side sound when I was listening to old Twista tapes, I listened to the high-hats in his songs. I started to realize all of his hits had a certain rhythm to them, and it was just like something I studied and once I kind of perfected it, I realized “Ok, this is how people will know I’m from out West.” When I play people my music they be like “Oh you can really tell it’s you.” They don’t how to explain it, but they feel that West Side vibe.

And that wasn’t even intentional? It’s just something that sorta happened?

Is it true that you just started doing both of those 2 years ago?

Which did you start first?

I actually started engineering first. I started recording my homies, I was just taking them to the studio. I’m the type of person where I can’t just sit around and not do anything. I don’t want to sit around and feel like I’m not doing nothing. So I was like “Ight, let me learn how to record.” So I started recording Pivot, you feel me? And then I got into production.

I knew from the jump that I was going to get into production, it was just a matter of time. Three years ago at SXSW, I got my first laptop and downloaded Fruity Loops, and then I just took it from there. I’ve been doing production the longest, and that’s what I have the most passion for.

A lot of people don’t know it, because when they first see me, they see me DJ’ing and that’s how I bring them in. And if they’re really intrigued, they’ll eventually find my SoundCloud and come up to me like ” I really fuck with your beats,” and I’m just like Aye!

So you consider yourself a producer before a DJ right?

Yea. For the last month I’ve just been like, “You know what, you’re an artist Squeak. You’re a creative.” You feel me? I’m a creative.

True. You don’t want to label yourself.

You know! At first I thought that was corny, and then I realized there’s hella shit I want to do. I’m a nerd. I like to sit in the crib and just learn stuff all day.

Do you think experience in engineering and beat-making helps strengthen your DJ’ing abilities?

Definitely, because I have a better understanding of music. It gives you the common sense of music basically, and DJ’ing has even helped me become a better producer. Just knowing the timing of when certain instruments come in and dropout, you know it helps.

What caused you to start making music?

I had just gotten out of high school, and I just started getting in trouble and ended up on house arrest. So my brother FRSH Waters was just like “Aye bro, just go down the street and fuck with gang.” So, I just started taking them to the studio. I was literally taking them to the studio. I just felt like I needed to do something. I always knew I was gonna do something I just never knew what.

You’ve described yourself as a new representation of the new West Side, can you talk about that?

Thats what I like to call my sound because you’ve just never heard anything like it. We, Pivot, have a certain sound but individually we also have certain sounds. I want people to hear my music and be like that’s Squeak, that’s that new west-side.

What’s your role in Pivot gang?

Okay, so Pivot is a West Side boy band. We’re a family, literally. We’re all related someway, somehow, and uh it’s gang. I DJ for three muthafuckas in Pivot. I DJ for Joe Chill, Mfn Melo and FRSh Waters.

The first person I DJ’ed for was John Walt, rest in peace. He’s the reason I started DJ’ing. My first beat, he rapped on it. He did that shit, that shit was great with him and Melo. That was my first production into the world. But yea, I just be Pivoting everywhere I go. That’s why my name is SqueakPivot, because Pivot is the reason I be out here.

What do you mean when you say you be pivoting?

Shit when you see me, you just gone think of Pivot. That’s my family. The reason I’m making these moves.  We call it pivoting and when we talking we ‘churchin.’

You released ‘Good Waters’ about a month ago. What went into producing that track?

That whole process was beautiful. My engineer Cole works out of Classic Studios and he reminded me about the session and then I invited the artist Sundé down. I’d met her at a show. I saw her perform and was like damn you’re really tight. After that show I just invited her to the studio and then we made a song. I reached out to her again for this one. I just made the beat, an 8 bar loop, and she writes really fast and really good. She’s really talented but yea after 20 min of me making the beat she went and recorded and she sent the vocals to me and we worked on the track like all night and we finished. It really meant something and everyone was really into it.  I was super excited to release that.

I’m trying to get the artist that I fuck with on my beats. So maybe hopefully a project to come about but I’m not going to rush anything. I like to take my time. I just want people to see what I’m on production wise.  So you really just gone see more production coming next.