Learn more about the Minneapolis native. 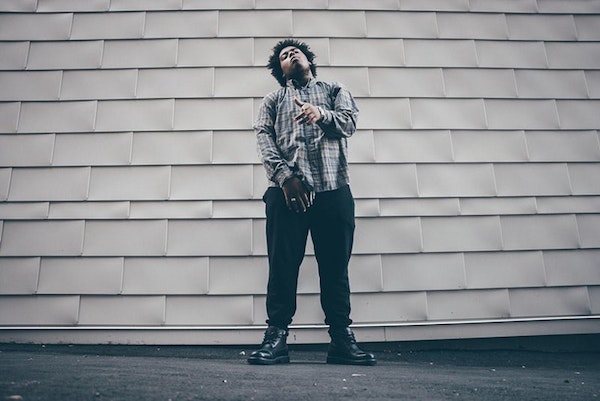 Lucien Parker has been lighting up the Midwest. We recently snagged a phone call with the rising artist before he blows up and becomes too busy for interviews. Lucien talked with us about his upbringing, DIY attitude, college experience and more. Besides being holistically talented and having a million-dollar work ethic, the Minnesota native was also one of the most genuine souls I’ve talked to in a while. Read our full interview with Lucien below.

You’re from Minneapolis, but you’re currently out in Madison (Wisconsin), so I assume you go to school there?

I was, I was going to UW-Madison for a while, but actually just this past semester withdrew. Technically on paper, I’m still enrolled at Madison, but like pretty much dropped out so I could focus on music full time. I almost finished my whole Sophomore year, but I kinda just got to the point where I was fed up, just wanted to focus on music, like that wasn’t the lane I wanted to be in.

That was actually going to be my second question, like why go through that college debt when you just want to be an artist.

It’s funny I actually had a scholarship here, that’s how serious I was about music, is I gave up a full tuition scholarship. I was in classes and I was bored, and it was taking away from what I wanted to do. And I knew that when I graduated this is what I was going to be doing anyways, so like why not put the time in now. That’s just like kind of where we were at, is that I was good enough that if we put all of our energy into it, we could make it work, and so far it’s been really good. It’s not like I blew up over night, and I’m not even close to like where I wanna be, but a lot of good things have definitely happened since I dropped out.

Madtown’s got an insane party culture, that must’ve been a dope place to start performing.

Uhh, not really actually. It’s small, and the population of black people is like 2%, on campus, so it took a really long time to help in creating the local scene to where it is now. Cuz what I’ve heard from a lot of like older rappers that have been around for a while is that Madison used to be poppin, and then a bunch of things happened, whether it was like a drug bust raid a few years ago, or people moving away, or bars and companies started banning hip-hop, things like that. So there was a really good scene that was on the move, and then it kind of slowed down and stopped for like a while, like a few years, and now in the last couple years it’s been on an incline again, getting back to where it used to be. And hopefully this is where it’ll catapult itself again, to like the next level.

Show-wise, what’s the plan for the future?

I headline Memorial Union Terrace in Madison August 18th, and then following that we will be announcing a fall tour probably in the next couple weeks. It’s gonna be mostly Midwest, we’re tryna solidify our fan base in the Midwest, and then slowly grow it outward.

Let’s talk growing up in Minneapolis. I saw this video of you reciting a poem. Did you get a start in poetry before ever getting into rapping?

Yeah, that’s exactly what happened. I didn’t start recording until junior year of high school, but I’d been writing poems since I was like little. In high school, I started to get into competitive poetry and I actually ended up on the Minneapolis team that went to Brave New Voices (an international slam poetry competition) for two years in a row, so I actually like went to the 2013 Chicago and 2014 Philadelphia competitions and competed against 500 youth poets from like Chicago, LA, Philly, Atlanta, South Africa, New Zealand, Guam, so pretty much all the major cities and a few countries. Then I just like kinda slowly started recording in homies’ basements. I started recording with Aaron Aye and the homies Jessie, Jake and Tommy. Then I stopped and picked up engineering 2 years later again in college. When I stopped, I still recorded but I paid for professional studio time. Then after 2 years of that I started recording myself and now it’s been 2 more years since I started.

The hook of “Impossible” is “made a peace with it I originated from the impossible, that’s a rocky road”. Is this mostly about your parents being divorced?

So, yeah. I actually have like a really crazy life story, my parents were never together, they just like co-adopted a kid. My mom is actually gay. My mom recently, separately, co-parented with two other partners, obviously at different times. But my oldest sibling, she (his mom) had a different partner, they co-parented, and ya know whatever happened, they ended up splitting up, and then she had another partner, and they co-adopted a kid, and then she co-parented a kid with my dad, which is me obviously. I recently also reconnected my relationship with my biological family last summer, around the time I dropped Black Sheep. So, it’s been an interesting 20 years, and I now have good relationships with both my adopted family and my biological family.

You mix, master and record everything yourself right?

Correct. I actually recorded my first album Black Sheep out of my dorm room last year, out of the Sellery dorm at UW. Now me and Brennan actually opened up our own recording studio in Madison, so we now own an actual legit recording studio.

You have some smooth ass beats, is there any one producer who really helped to mold your sound?

Yeah I mean, I don’t really think I could say there was one producer ya know, cuz I think every person that has like touched a track for me has like helped me figure out what I could do with it and has given me something that has inspired me to write the songs that I’ve written. So, definitely shout out to all the producers I’ve ever worked with. Of course the name that everyone wants to here about, especially based on my latest single “Impossible”, is BNJMN. BNJMN is definitely one of those dudes people definitely wanna hear about just because he’s produced most of my latest bigger singles, and I’ve released a lot of songs produced by him and still have a few songs we’re releasing that are released by him. He’s definitely influenced my sound (sonically) for sure, and has given me tracks that were easy to, like when you hear a good beat, and you just start flowing. So, BNJMN‘s been dope but I definitely wanna highlight Shane Taylor (who produced most of Black Sheep), my homie Main.Key, and also my homie from Minneapolis Andre Mariette.

Are you going to try and get into producing your own beats in the future?

I actually have already, I have a few songs that I’ve written, produced, and recorded over. I just like probably, I’m very patient, so I probably won’t release a lot of it for a while. I feel like I just haven’t learned enough stuff where I would wanna like put it out.

You have a really solid team around you for someone at your level. Who all  does the team consist of?

Yeah so I’ve got my manager Brennan, who’s really like the backbone of my entire team. He definitely does the majority of the work, like the behind the scenes stuff that helps us get prepared for everything we do. Brennan is smart as hell, and he’s gonna be a lethal weapon for sure. Then there’s DJ Mando, and Mando is literally like the Steph Curry to my Draymond. We are a team and have to be a team. Every time we go on stage, he’s the guy that’s throwing me the alley oops. More times than not, especially in hip-hop, it’s easy for your DJ to kinda just be your DJ, but we wanted Mando, and put a lot of time into Mando becoming a commodity in himself. Niko Hagen, who has shot and directed all my music videos that I have out. I think he is on his way to being one of the rare talents of the film industry, someone I would definitely compare to Cody LaPlant and Damien Blue (from Milwaukee). And then, obviously thank you to my various homies that have done incredible work like driving to shows, helping us set up, selling merch.

Your new single “Changes” was too good, can we expect a full project anytime soon?

I just finished my Chapter 5, Chapter 6 will probably be dropping in the next month or so, and following that will be a Chapter 7. And then once Chapter 7 happens we’re moving into the next series of my life, and that will be the end of my chapter series, or chapter… I don’t even know what to call it. Basically they’re audio journals, is what I like to call them, of like my whole life narrated out. So my audio journal series will end at Chapter 7. Pretty much all of that should be released in the fall, and after that I go into album mode. I won’t announce anything about the album, except that it’ll be coming out some time in the next year.