Learn more about Chicago’s own. 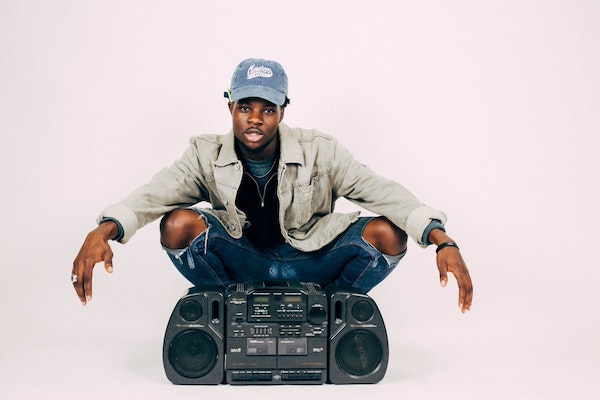 At a fresh 22 years old, Femdot, a Chicago native with a 90’s New York sound, is on the rise. A humble cat who is currently focused on graduating from college and rolling out more content for his recently completed mixtape 20/20 hour, Femdot is truly coming up. From performing at West Fest Chicago to opening up for Lil B at the Metro this summer, Fem has been taking no prisoners. I was fortunate enough to hop on FaceTime with him this past week and talk to him about his sound, being from Chicago and why he labels himself as a writer before a musician. Check out the full interview below!

In your bio, you refer to yourself as a front-runner for the next wave of Chicago hip-hop. Why is that? And how would you describe that new wave?

In terms of next wave, I mean like every couple years there’s a couple of different groups of people from Chicago that push through. Really since like 2008-2009, but that started happening hella rapidly around 2011 with Chance and Alex Wiley and Kembe X. Then, you have drill with G. Herbo, Bibby, Keef, Dreezy, Tink and Vic, but there’s been a gap since the last people to really pop. I mean, you have Saba and Noname, but they have been kind of bubbling for awhile. I have been working to establish myself as not just one of those people, but one of the main ones to initiate that new step of what Chicago music looks like.

You said you feel like that door for Chicago artists started opening in like ’08 or ’09, but I always thought Keef opened the door.

Yeah, I say ’08-’09 because that’s when the internet started bussin’. You had The Cool Kids, you had the beginning of Rockie Fresh, you had Kids These Days and a couple of these people who never transpired, but were catalysts for what a lot of the blogs were covering. Even before that, you had Bump J who honestly was the beginning of what Chance is doing now. He was one of the first people to get labels to come to Chicago and look at him. However, in terms of success and like this renaissance of Chicago fame or whatever, Keef without a doubt. Keef was the catalyst for Chance, Bibby, Herb, Mick, anybody. We are living in a post Keef era.

How has Chicago has inspired your sound?

Being from Chicago effects what I think is hot & what I think is cool. I kind of focus on making the music as authentic as possible to me, but also to the experiences I’ve had in the city itself. A lot of people can relate, which is really weird because I never thought that’d be a thing. In the music I don’t really shy away from saying shit that be hella Chicago, because a lot of muthafuckas will actually understand.

I know you split a lot of your youth between Chicago and the South Suburbs, so do you ever feel like because your youth wasn’t solely spent in Chicago, you have to try harder to establish yourself as a “true” Chicago rapper?

That’s a whole ass thing, mothafuckas be quick to throw the burbs thing out there, and that’s valid in a sense because a lot of people who come from the burbs like to glorify a lot of of shit that happens in the city when that isn’t really their experience. But, I personally have never felt like I need to overcompensate for my Chicago experience, because my experience is actually there. It’s not like I’m cappin’ about some shit that I know nothing about. When people ask where I’m from, I’m always like I’m from the South Burbs and I be in Uptown. If anyone ever tries to throw the burbs thing out there, I just be like, I have the same experiences in terms of the things I’ve been through in the city as I did in the burbs.

How old were you when you wrote your first legitimate song?

I was like 12, and back then I was recording with a RockBand Mic in my basement. I would record mixtapes and sell them at school. I was 15 when I was like ‘Oh, this is really a thing.’ I had dropped a mixtape somewhere on the internet called ‘A Tribe Called Fresh’ when I was 16, like right on my 16th birthday. It was the first time I was ever posted on blogs or anything like that. And it was trending on Twitter. After my junior of high school, I was focused solely on the music. To recap, when I was 12, I realized I was good. When I was 15, I realized other people really liked my music. And when I was 16, I started to sorta like my music too.

I heard that you consider yourself a writer before a musician. Why is that?

I was always good at English and I was aways good at writing. I’ve always liked words. I’ve always appreciated good writing, if I read an article and it’s really good, I think that’s so dope and I feel like restricting myself to solely being a rapper limits where I can get inspiration.

How would you describe your writing process? Are you one of those people has to write an idea out once it pops into your head?

For 4-5 summers in a row, I did   song ideas a day. Whatever popped into my head, I’d write it down in a notebook or in my iPhone. A lot of times something just pops into my head sporadically, or I’ll get inspired by a word or by somebody else rapping, or if I’m going through it, I just got to write it down.

You just dropped the last 4 songs that completed your 20/20 hour mixtape about 4 months ago. What are you working on now?

Right now I’m finna graduate and do more shows and shit. Then, there’s some videos coming out, and I’ve just being working with other artists in and out of Chicago. I also plan on touring and performing at festivals sometime next year when I’m done with school. Mainly, I’m just trying to pump out more content for 20/20 hour and finish working on this Fem De Aa Crem 2 project; that’s the big next thing.