The Chicago-based producer tells all. 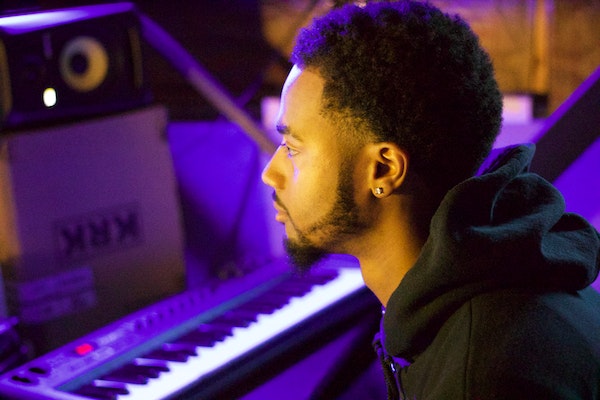 Dim lighting, a bright computer screen, a glistening keyboard and an intellect for musical creation that is unparalleled; Ermahnx – a producer out of Chicago – is creating sounds that evoke emotion and not a hypebeast following.

When did you get into music?

Early, my pops started a church when I was very young and you know paying for musicians is very expensive so he put me in classes so I could learn to play the piano during church service. And I was 16 or 17 when I actually started getting on the computer and messing with software and creating beats.

I’m a music guy and music is very spiritual to me and I really have like a love for it. I feel like music can help people find themselves and that divine connection. Certain elements in the melodies manipulate our emotions  but that’s not really on the surface level but that’s basically what keeps me attached to producing and that’s why I’ll really never stop doing this.

And since you’re such musical person what made decide to get into producing  and not rap, since rap is the typical route people go down.

I’m really not a forefront guy and that’s really why.

You’re more  behind the scenes?

Kind of, but not too behind-the scenes. You would’t see me like actually rapping a song.

How has being from and around the Chicago area influenced your sound?

Hmm, well basically my use of the drums-really hard drums- and just a lot going on in the track. That’s really how Chicago is cause it’s loud.

How long does it usually take you to make a beat?

Not long, it really just depends on the idea. Like if a melody has already come to me and I already got it in my head then I know what I’m finna do. I already know what instruments I want.

Who are some people you’ve produced tracks for?

And how does that work since you work with so many different types of artist? Like how does the way you make the beat differ?

If I was to make a beat for an artist I already know how they sound  and how their flow is. So  for example, I’ll know what tempo to set based on the artist and what cords will sound best with that particular artist.

Do you feel like there’s any misconceptions about being a producer?

I feel like producers have to take a different approach to get in the industry. You know artists they make songs and if somebody likes that song, boom. But with a producer it’s not that simple, you know what I’m saying? You’re music has to really like circulate like people gotta consistently  hear about your name. Producers also have to advertise for themselves on a 24 basis, cause it’s rare that you ever hear of  signed producer. But that’s all apart of the journey.

You seem really happy about this, I don’t talk to a lot of people that get the excited when they talk about their craft.

It’s cause I really like doing this, I’m really passionate about it. Music is just in my heart, it’s literally there.

Are there any producers that you look up to?

Jay Dilla, of course. You can say Jay Dilla because his drums and he really created like a certain bounce and or rock within the music. I also like Bob Marley, Iman Omari and Mndsgn.

So what’s next for you?

I wanna drop an EP. I have never done that so I’m working on that and it should be coming out later this fall.

Are you gonna pull a Calvin Harris and have a bunch of  people singing or rapping over your beats or is your EP going to be strictly beats?

A little of both because I like working with artist. I like hearing what my music sounds like with people on it. Cause like y’all coming together and making a whole creation and that’s just dope to me. Because when you sit down and listen to your own beat it’s different but after you send it to them and they do something to it and send it back to you it’s like you’re listening to something entirely different and that’s dope to me.