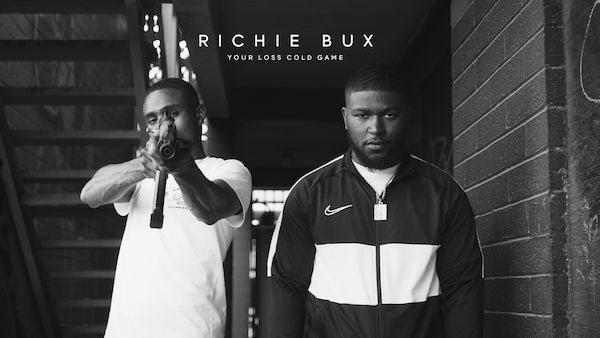 Since 2019 has started, Indiana native, Richie Bux has been on a campaign of destruction. After kicking the year off with the well-received, “Ain’t Safe” video, Bux followed up with a viral video in, “Michael”, both songs which are set to appear on his upcoming album. Adding one more stone in the gauntlet before reaching total domination, Bux drops off his insane new video for, “Your Loss, Cold Game”.

Directed by GioVisuals, the video for the track is shot nothing like what you see in your everyday Rap video. Shooting with a quality that makes you feel as if you’re watching the movie, the storyboard and sheer cinematic sense of the song confirms that, that is indeed what you’re doing. Utilizing some crazy shots that include Bux interrogating a masked man, the Indiana native hanging out of a moving car like a stunt-devil and of course the iconic shot of Richie letting loose on the basketball court with the smoke behind him.

While the video itself is one of a kind, the song is the real star of the show, here. Employing a beautiful soul sample to help throw you off the fact that Richie is spitting straight murder bars, the curveball is clever—ensuring he doesn’t drive away casual listeners—and one of the reasons why the ever-so-calculated Richie Bux is one of the hottest underground acts at the moment.

Press play on the video below and get blown away by the professional quality and effort that was showcased in this video. Afterward, get ready for Richie’s new album, Early Infamy II: The Fraud Fix, which is slated for release on May 1st.